Camper Tuning. We went to visit one of the better camper (camper) tuners in the Benelux, the Dutch firm Bullpower from Dronten.

Does it make sense Motorhome tuning? and if so what's the use. We try to give you an honest and objective answer to all these questions. 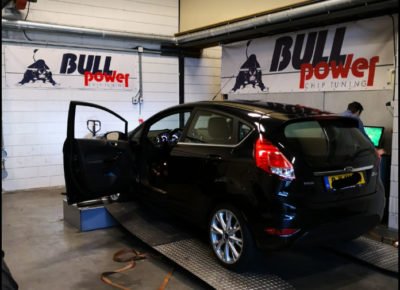 Motor tuning or camper tuning is common and increasingly common. The camper van owner also wants to have more power, but also drive more economically. On the one hand, motorhomes are becoming more and more luxurious and therefore also fuller and heavier. On the other hand, people also want nice, smooth and more economical driving during the holidays. Motorhome tuning could then be a solution. As soon as the first hills appear or the wind rises (against) all momentum is often lost and fuel consumption increases considerably. The construction on a standard chassis is in many cases too large and too heavy for all the extras and accessories on the camper . The weight and often also the large frontal surface of the motorhome construction and the associated high air resistance make it difficult to keep up with the pace of other traffic. Especially if you want to drive quietly and smoothly at a low speed.
A lot has already been written and often, if not too often, about motor tuning in general, yet we have in common to take a closer look at motorhome tuning specifically.
And that was not entirely without success.

What does a specialist do now, who initially does not talk about tuning but about fine tuning. It uses the fine tuning of the ECU, the so-called engine management, also called the control cousin or Electronic Control Unit (ECU) so that your engine is not tuned to an average, but specifically to your wishes and driving behavior. After all, you want to be able to drive pleasantly and smoothly under all circumstances, with pulling power at the right time, flexibility and, not unimportantly, low fuel consumption. This ECU unit keeps track of, among other things, the speed, the temperature of the engine and the intake of outside air, the amount of fuel added and the oxygen content present ect.ect. determine the amount of fuel required and so on. The modern camper van is of course sold in many countries where the composition and quality of the fuel varies. in addition, different countries deal with maintenance intervals, for example. The manufacturer calculates a safety margin for all countries, thereby preventing serious damage to the engine if the quality of fuel, oil, etc. is less than that. The constant striving for more economical engines and the increasingly strict environmental standards with regard to exhaust emissions are forcing the manufacturer to become increasingly economical with the supply, eg fuel. Things like air temperature, atmospheric pressure and average driving behavior also play a role. In a number of countries, the ECU unit is even intervened for tax reasons. The manufacturer then opts for an average balance. In Europe and certainly in Western Europe, the fuels and conditions are good, think of fuel maintenance intervals, etc. This allows the safety margins in these countries to be adjusted without consequences of the lifespan of the engine (fine adjustment). Within these margins there is sufficient room for an optimization of your camper van. The safety margins of the manufacturer are not exceeded with the fine adjustment. With an order from the insurance channel, we set out and test various tuners in the Benelux, for 2 reasons. Firstly, it was to find out whether it could do any harm for insurance reasons and secondly to find out whether it actually makes sense. Of the 28 motorhomes tested, we asked all motorhome owners about their findings and their conclusions. We came to an astonishing result. No results were noticeable or measurable on the test bench with 4 campers tested, but they had paid an average of 600.00 euros. With 8 tested campers, the result was no more than a few horsepower more and virtually no more torque measurable. But the most eye-catching was in 3 tested campers where the owners indicated that the campers had been tuned, but upon checking it soon turned out that this could be true simply because the car did not have an electronic control (which older vehicles) these have therefore never been tuned. She did say that they had received more power, but after checking it turned out that the fuel pump had twisted, which is more power, but also costs significantly more fuel.
But there were also positive results to report. It was convincing, however, that there were 13 tested campers that had only been independently of each other at the same company, so curious as we are and become by all the stories of the camper owners, we went unannounced to the company in the Netherlands. It soon became clear to us who we were dealing with. everything was neatly taken care of and it was soon made clear to us what exactly engine tuning or, as they prefer to say themselves, fine adjustment, also a finely explained adjustment without having your own test bench can never be a good harness / fine adjustment. Look here for more information!

With this article we wanted to demonstrate that the tuning/fine tuning of a motorhome
* Must be a real specialist work.
* B If properly adjusted, following the standards of a GOOD TUNER will not or can have no adverse effect on your camper. A GOOD TUNER writes and makes his own programs and tests them on the test bench.
With one exception, we do not want to withhold from you the address details of this Dutch company. Need more information?

QUESTIONS ABOUT DAMAGE TO YOUR CARAVAN OR CAMPER, ASK THE CARAVANREPAIR® SPECIALIST

Scan the QR code with your mobile phone and send us a message.